Case Study: Confidence in Virtual - What Trickbox Has Learnt From The Pandemic 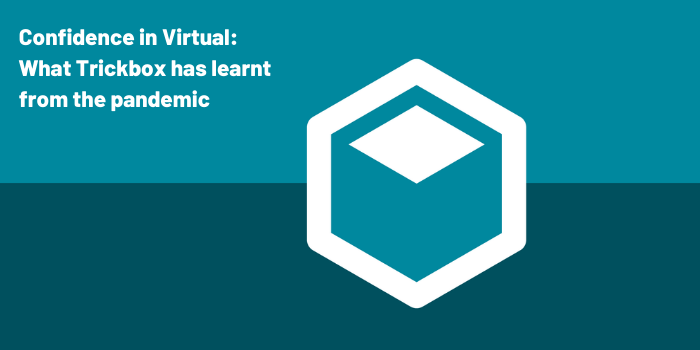 Talk about taking two steps forward, then jumping one back. No sooner had Britain and several other Western countries gotten used to the idea of everyday life being on a firm trajectory towards some kind of normality, and the coronavirus crisis changes once again, with the new — and rather sinister sounding — Omicron viral variant sending financial markets tumbling, catalysing new travel bans, and causing significant uncertainty about what comes next in the ongoing, seemingly never-ending nightmare.

Of course uncertainty is the key point to remember. Already we’re hearing reports from South Africa, where this latest version of the pathogen was first identified, that this could actually be a positive thing — cases seem to be milder than the dominant delta, but with a potential to spread faster.

The end result could mean a less potent, easier to handle COVID-19 strain is about to take over. But the opposite may also be true. Whatever proves to be accurate, this latest twist in the tale shows just how quickly things can change, and how rapidly the world could find itself back in 2020-style collective isolation.

f nothing else, it supports our predictions that hybrid and fully virtual events will continue to be hugely popular over the next year as the world continues to navigate this confusing roadmap. But what about after that?

With metaverses becoming so prevalent, we’re about four headlines away from getting tired of the word itself, and with digital tools and the apparatus required to produce impressive events in cyberspace becoming increasingly sophisticated by the second, it seems clear the level of investment in these technologies has now been so great it’s unlikely we will see virtual abandoned.

Even if the pandemic disappears overnight. We’ve reached a point in time when gatherings beyond real life have become mainstream. And now the genie is out of the bottle, why would we want to put it back in?

Trickbox is a complete broadcast and production service based in London. The company delivers solutions for everything —  from television to live virtual events and from film productions to pre-recorded shows at its dedicated TV studio in The Shard, the UK capital’s tallest tower. Speaking to Sam Lynam, Project Manager, it’s obvious that while the last 18 months have been nothing short of a rollercoaster, consistencies have emerged.

“The COVID-19 pandemic made virtual events and remote productions mainstream, and that’s now become an established service that we can offer alongside the traditional broadcast and AV services that we always offered,” says Lynam. “We’re confident that virtual events will still be around for a while yet.”

Bringing us up to speed on how the sector landscape has changed in the second year of the COVID-19 pandemic, Lynam is quick to point out that while coronavirus-related needs are still everywhere, there has been a gradual shift to a new phase of our new normal.

Simply put, as Eventcube’s own research showed earlier this year, for all the technological advancements on the virtual front, mixed-realities are rapidly growing in popularity. Offering people the choice of where and how they attend anything from a symposium to dance music festival is — unsurprisingly — a big hit. Meanwhile, as the limitations of early online-only gatherings became clear, significant steps have been made to compensate for some of what was lost in the initial stages of the crisis.

“We have seen a recent increase in outside broadcast and studio projects and there’s clear signs of clients adopting a hybrid model of both in-person and virtual audiences and contributors,” Lynam says, explaining the projects Trickbox has been working on in the past few months show compelling evidence the company’s sector, like many others, is finding ways to push through the barriers created by COVID-19.

At the most innovative end, the current circumstances are catalysing bold new ideas in terms of participation, consumption and attendance, which in reality have been long-overdue as a means to improve accessibility and inclusion”.

In order to take their virtual solutions to the next level, Trickbox started working with Eventcube early in 2021. And, as Lynam explains, this is far from an off-the-rack partnership.

“The idea was to develop an in-house customisable virtual event platform, to enable us to deliver bespoke, white label virtual events and conferences for our clients,” he says, clarifying that as proverbial sands shifted under feet, the requirements and needs of those using their services also transformed. Having the capability to evolve in tandem was absolutely critical to overall survival.

“Whilst we had a very specific initial requirement, as our client’s needs have changed, Eventcube has been great at continually evolving with us.”

So what lessons can we take from all this? The easiest to comprehend is the need to understand and embrace all possible solutions to delivering your product or service to customers. We live in an age when lateral thinking has arguably never been more important, and that means being able to switch to plans B or C efficiently and effectively with only a small amount of notice, losing as little as possible in that process.

But there is more to learn, too. For instance, we are finding more and more companies involved in events confidently stating that a tipping point has passed.

The future of gatherings — whether that’s a conference or concert — looks markedly different from the past, or even the present. To paraphrase a meme that has been doing the rounds of late, the world we grew up in — commercially, personally, and socially — no longer exists.

However, the reassuring thing is where we go from here is, to a great extent, in our hands. As such it has never been more important to make sure the right professionals and partners are in place to allow us to thrive rather than simply survive the most transformative period in the history of our industry.

For more on-the-ground insight from the events sector, read our previous case studies; how the pandemic transformed the business model of KTX, the ways in which TBI has incorporated hybrid into its future strategy, and how EA Festival managed to break the mould for its first year with both online and IRL events.