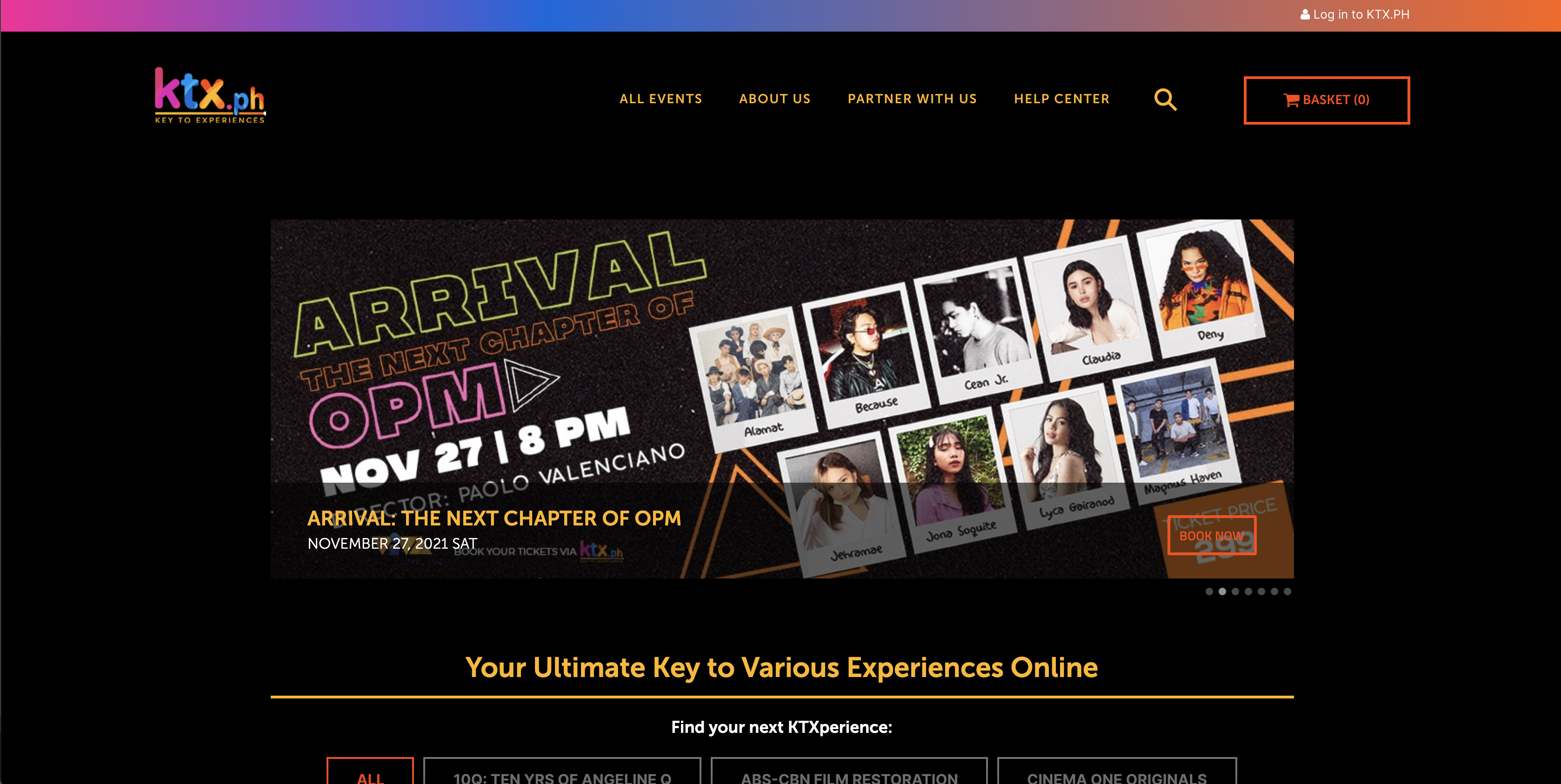 While a huge number of organisations adapted their models to suit the new abnormal, very few can claim to have changed what they do almost beyond recognition. KTX is one of the few who can stake its claim. Originally, the Philippines-based business had focused on ticketing but is quick to uncover opportunities amidst a global pandemic to update their business model and delight a growing audience.

They say when a door closes a window opens. Or vice versa. Either way, we’re not entirely sure many people working in the live events, culture and arts sectors felt that way back in spring 2020. But while a huge number of freelancers, contractors, talent and organisations adapted their models to suit the new abnormal, very few can claim to have changed what they do almost beyond recognition.

Pivoting towards a bold and lucrative direction

That’s exactly what happened at KTX, though. Originally, the Philippines-based business had focused on ticketing, but as Gian Carlo Vizcarra, Head of Business Development, is quick to point out, the firm had long struggled to keep pace with larger, more established and, in some cases, legacy competitors in the notoriously cutthroat sector. All this changed last year, though, when the emerging crisis presented the opportunity to pivot in a bold, exciting, and — most importantly — lucrative direction.

“It’s because of Eventcube’s idea and acknowledgement that the pandemic might be longer than people thought, that we moved into digital events. We knew the live events we were hosting were going to be shut down. By mid-February we were in lockdown, by April the team had already set up for virtual events and by mid-June we hosting digital events. Immediately we had some small victories that showed the value in this move,” Vizcarra tells us, speaking through video call from a Manila still very much in lockdown.

Outdoing the big guns in Philippine ticketing and events scene

“KTX as a ticketing platform for live events was already behind competitors, there are legacy companies in that industry. So it was very hard for us. The pandemic was an opportunity to change that. In some ways it levelled the playing field. It’s not levelled anymore, because KTX is now way ahead of other platforms. Humbly speaking,” he continues.

“Because the others were so big pivoting was more difficult, and maybe they couldn’t see how or they wouldn’t think of it as they are established in what they do. We always say KTX is a small fish in the ticketing industry, until we changed and broke new ground.”

This may sound like PR speak but the proof is plain for all to see. A business that was no longer fit for purpose has successfully repositioned itself as a market leading digital events host, partnering with the ABS-CBN movie and television giant at a time when the latter needed new ways to distribute its content. A perfect meeting of minds, ensuring programming from the stable is available to audiences across the globe.

The initial struggle of transitioning to gated events

“Eventcube started talking to us about gated events around mid-April. The only problem was that people in the Philippines are used to having free concerts broadcast on Facebook — it’s a pandemic, we have to help each other. So all the artists were doing fundraising shows. It was hard to convince them — ‘why would I charge when everyone is doing it for free, people might thing I’m greedy’. Maybe in May, June, and the end was still not in sight, an artist we had, Jed Madela, said yes,” says Vizcarra, going on to recount how that first show attracted ABS-CBN to KTX, with former using latter to host a YouTube series finale.

The success of this proved not just that there was a business model in turning all types of content into virtual events, but also a hunger for fans to share experiences together. Whether that’s watching a TV show at the same time, or attending a stadium gig remotely. Having sold 3,500 tickets for YouTube series broadcast, KTX’s next ABS-CBN tie-in was on a much bigger scale — screening the young singer, musician and pop heartthrob Daniel Padilla live in concert to adoring fans who weren’t lucky enough to have IRL tickets. “It was the first time we asked to upgrade the server with Eventcube. We were so afraid it would crash,” says Hedda Ocampo, KTX Head of Platforms. Skip forward to today and those initial experiments have become established blueprints for what is now business as usual. KTX has become the go-to online destination for fans of all kinds, from avid series fanatics to music heads. There’s still a ticketing platform in there, but it is so much more besides. Movies and shows hit here before other VOD services at special screening events, while live performances give people in rural areas, not to mention overseas territories, the chance to ‘be there’ in the moment. Crucially, it’s this idea of audiences being present, together, that sets the company apart from rivals, along with a clear personality.

“In the Philippines when you talk content on a VOD platform it’s always an app. We are not. Because we are not a content producer we don’t know what we will host in three months. So the relationship with the people is different. Your relationship with Netflix is always maintained, like a girlfriend. On KTX it’s just a one night stand. You go, finish what you watch, then leave,” says Vizcarra, before Ocampo interjects. “KTX being an events platform pushes us to position everything as an event. Even the movies. The first adopters will always be the most rabid fans, and KTX became a fan site. More than just a platform.“We added a feature, Premier Nights, where everybody watches at once - like a livestream. That really appeals to fans. So we position ourselves as the place to be if you want to be the first, or if you want something extra. We always try to offer something extra, for fans, and that’s what sets us apart,” she continues, nodding to the way in which KTX is now a community hub as much as anything else. A place where people go to connect with others who share interests, given the past two years, or thereabouts, have been defined by isolation, it’s not hard to understand why this concept has proved so popular.

Nurturing this newly built relationship with their audience

“We try to make it seem like it’s a warm relationship. When you come to KTX or use the social media it feels like you are talking to a friend. It’s not an app, it’s not a bot, there is a personality,” says Vizcarra, confessing that this side of the offering has emerged in real time, rather than being pre-meditated. “It didn’t start like that, at first it was survival. But now it’s building bridges across the globe because we are available worldwide. Also here, the concerts are all in Manila, but what about all the people in the countryside. They don’t have the opportunity to see this, unless they watch with us. They don’t have access to all that content, they would never have been able to watch that before — the concert, the premier.

“I guess at one point when we were doing this we got the message from ticket buyers of KTX that it would still be the place to come even after the pandemic. Because of the experience,” he continues, before Ocampo hits the nail on the head in terms of why the future looks so bright for the business right now. “Even our competitors cannot catch up to what we can now do… We are grateful for our second lease of life at KTX, and that’s because of Eventcube. And they were very helpful in making the website how we wanted it. Different people have different way of using and accessing content, look at other websites. Our is very Philippinised. They supported us no matter how inane the requests were. They supported us and we have made a formidable, world class, stable platform that is Philippine. The formula is perfect.”